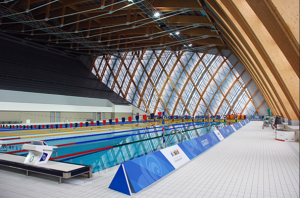 Ever had one of those swim sessions when you know that no matter what you try it’s going to be pants? Well on Wednesday I made it home around 6:40pm and was humming and harring as to whether or not I wanted to swim at 8pm when I noticed on Facebook that the session had been moved to 7pm.

So without thinking I jumped in the car and headed for the pool, to be met by carnage, no one had told the pool that we now had the 7pm session.

I am sure you can imagine the confusion as the public were turfed out of the main pool and shepherded into the small pool (4 lanes x 20 m) to make room for about 12 of us.

The staff started to put the wave eraser lane ropes in and tried to manoeuvre the big reel thing they are wound, on around the corner of the pool when it overbalanced and fell into the water. (Much to our amusement, in fact even EMSC 1.0 had a grin on his face)

After the rescue of the reel from we eventually got going about 7:15 and I lasted about 30 minutes long enough to do around 1400m. The main set was a series of 500’s and we were meant to do 4 or 5 of them. Sadly I was so switched off I can’t even remember what I did although I know I completed 2 repeats pretty poorly before I called a time out and left.