A somewhat belated Happy New Year Bingefollowers. I hope you all had a great break and are full of resolve and resolution for the challenges that 2016 is going to throw at us.

As you know (from here) I rather uncharacteristically survived 4 sessions during Christmas week, which somewhat begged the question could I possible keep this going?

Well with the philosophy of Gui Gon Jinn ringing in my ears I was keen to prove that “my focus really does determine my reality” so I headed off to the Durham Tri session, on Saturday.

I even arrived on time (well just about on time) to do a two hour session, although if I’m being completely truthful here it was a mere 1 hour and 42 minute session but what’s 18 minutes between friends…. Ok around about 900 metres but quite enough thank you.

To elaborate on a theme from my previous post, the swimming community is indeed a small one and walking onto the pool side I found that the triathletes were sharing the pool with Sedgefield 75 swim club, coached by John “Obi Wan” Moore, and featuring Master Swimmer Liz Yaneske.

After a brief chat and catch up with N&D’s Jedi Masters (very brief by Binge standards) I dropped into the water.  I was then forced to negotiate a fiendish set or 6 of 50’s hanging off the back of the fast lane, for the first 42 minutes before EMSC 4.0 arrived with his session.

As you can see from below I was not assiduously recording the work out but you can pick up the flavour of it and there was a pretty reasonable distance covered. 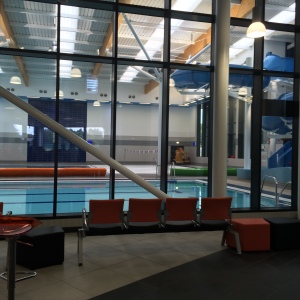 As luck would have it I also made the first Consett session of the New Year on Monday.

It was (predictably) quite busy with the usual suspects keen to work off the extra festive calories they’d acquired.

EMSC 1.0 was in sparkling form and we worked our way through a set of steady 200’s and (allegedly) faster 100’s the finer details of which escape me….Swimmer’s Alzheimers? or Waterlogged brain? or more simply just too knackered to compute or to care?