If the definition of insanity is repeating the same thing over and over and expecting different results then the Binge swimmer is truly bonkers. For the last four years, or to adopt more pretentious Olympian vocabulary, the last quadrennial, Binge has set herself the mile a day challenge. i.e trying to swim on average mile a day for a whole year and failing miserably. It’s a mere 587,411 metres, or more simply 11,296 metres a week and it should be eminently achievable and 2016 was going to be the year.

It had all started out so promisingly. I managed to escape to sunnier climes for a swimming holiday in January. The accessibility of 3 x 50 metre pools and some great training mates kick started my efforts and contributed over 70,000 metres to my total, well over target and with a bit to spare. Sadly that was the highpoint of my training year and it was seriously downhill from then on.

My chances of completing this distance in 2016 had completely stalled by the end of May and evaporated completely by the beginning of July when I would’ve needed to swim 72,000 metres a month for the rest of the year. As we go to press my swimlog is telling me I would now need to swim 86,000 metres a week (to make that total) so I’m resigned to the fact that it’s not going to happen. 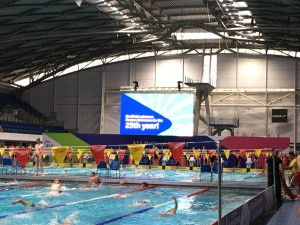 You would think by now I’ve learned that to actually achieve that total I just have to go swimming. However after the rather brutal and painful forays into open water over the summer Binge still hadn’t got the hang of this training lark. This mere detail didn’t stop her, with half an eye on the Decathlon, from entering 8 events at the ASA Nationals. Although her results there underlined the fact that it’s not sensible to swim more in a weekend’s competition than you have in the last 4 months.

Hard on the heels of that was being selected to swim in the National Inter County competition. Now usually I’m only allocated the 50 breaststroke and a couple of team races as the other stuff is left to much more accomplished swimmers. So when I looked at the first team sheet I foolishly said “yes no problem”, this was obviously much to the relief of our team manager Kate Nicholson as I turned out to be the oldest woman in our team and in recognition of that achievement was rewarded with 4 individual swims and a further 5 relays including back to back breaststroke legs in the last block of medley relays.

The delights of this particular event didn’t end with the swim either, first of all there was getting up in the middle of the night to drive to that sophisticated coastal resort known as Blackpool. Aargh the whole experience was so painful and humiliating but the drive back did leave me plenty of time to ponder how on earth I could swim 50 breaststroke faster than either 5 backstroke or more astonishingly 50 fly.

If I was in an episode of the original Star Trek I could almost hear Scotty shaking his head in wonder and saying “you cannae change the laws of physics lassie” as we all know water is denser than air and therefore a stroke with an underwater recovery should be slower (and is in most normal human beings) than the other strokes with an over the water recovery. I wonder if Adam Peatty has this problem?

I know that the answer is of course blindingly obvious; and that is whereas I may have a passable (if rather old fashioned) breaststroke, my backstroke and butterfly are absolute pants. The only positives I could take out of either swim was firstly that I was not last (nationally) and secondly that at least I’d acquire some decathlon points.

It seems that I wasn’t the only person caught in a science fiction nightmare as David Chaney and at least one of the swimmers from Cumbria found themselves in their own individual space time anomaly turning up a whole 24 hours in advance for their own personal version of Groundhog day never mind David it was only a mere 260 mile round trip.

Anyway I  finished the year as I started with a trip to Lanzarote where I managed a little bit of swimming, mainly motivated by the opportunity to road test my latest toy, a waterproof Apple watch, which, can count lengths better than I can, provided I’m not swimming kick! Anyone who knows me will realise there’s little chance of this.

I’m also not convinced that it is particularly accurate as my first session (a rather leisurely 3.3 k swum at an average speed of 2:05 mins per 100) produced an average heart rate of 171! Life in the old dog yet or a technical malfunction?