So the swimming starts in earnest today and my opener is the 800 freestyle. Now trust me I am no Becky Adlington but I like to swim something early in the meet to sort of  ease myself into it and the 800 for some perverse reason is the easiest way to do that.

This was also my first chance to swim in the second venue, the Alfred Hajos National Aquatic Centre which is essentially 2 outdoor 50 metre pools (one 10 lane and one 8 lane)  and an indoor and outdoor 33.3 meter pool and a couple of diving pools. 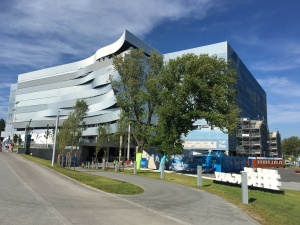 Pretty impressive and it’s located about 3km from the Duna Arena which has 3 x 10 lane 50 metre pools 2 indoors and 1 outdoor and an 8 lane 25 metre diving pit and a 25 metre outdoor.

So as if world championships weren’t complicated enough for the poor swimmer they throw a further anxiety factor into the mix not only which site am I swimming in today but also which pool?

If you have a sensitive disposition or you are easily offended then I would advise you to stop reading now because the graphic detail which follows is rather lacking in taste or couth.

One of the symptoms of big swim meets is the prevalence of the “flight fright or s***e” syndrome. We have over the years had to contend with some pretty awful toilet facilities.  My first trip to the loos at Hajos B was quite an experience. It was only after I’d sat down and turned to find the loo roll that I realised to my horror that there was none in this particular stall, in fact there was only a single role outside all of the stalls……

Fortunately there was no one else waiting so I didn’t have an audience as I waddled out red faced with my suit around my knees to grab some paper.

One other strange feature of the facilities in this venue is that the porcelain, has a platform where your poo lands before it is flushed away. Why on earth do they do that? are you supposed to examine it?

I’ve come across these in Germany before but the flush there has always had a really significant force and scoots the pile down the loo without any problem. Sadly that is not the case here, the flush is a bit ineffective and having deposited a steaming pile and then flushed it, a rather gentle stream of water came out and gradually nibbled away at the edges, until it had all gone honest it took so long to flush it away I was seriously worried I would miss my race.

Anyway having escaped the loos eventually I made it to the start, dived in and nicely stretched out for quite a pleasant swim outside in the sunshine, I realised once I saw my time (a mere 30 seconds slower than Aberdeen) why it was such an enjoyable 12 minutes or so!

Honestly it was pants…..