The trip down to Manchester last night was awful, the original plan was to leave around 6 but in pretty typical Binge style it was nearer 7 when we set off.

Teenage Triathlete had decided to join me for the weekend despite being in the middle of “A” level revision. This was because Bob had planned to be a weekend warrior at Blenheim  doing back to back olympic distance triathlons over two days. You can read about last year’s efforts here and TT clearly didn’t fancy being left home alone.

Although a recent  knee injury put paid to Bob’s machismo this weekend, TT still opted for the trip to Manchester, no doubt succumbing to the prospect of a visit to the Hard Rock Cafe.

The traffic on the A1 was horrendous and what is usually a 2 hour 20 minute journey was looking at one point like 3 hours 30 minutes, but we made pretty decent time from Leeds and arrived at our hotel at about 9:50 pm. We abandoned the car in a nearby NCP (I know I’m going to regret that when I have to pay to take it out!) and legged it through Manchester city centre in search of Fajitas and Legendary Burgers! 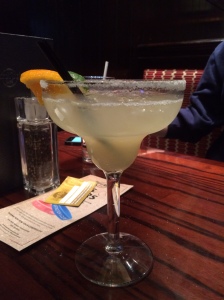 Being safety ensconced in a booth at the HRC, for some inexplicable reason I decided I deserved a “Triple Premium Margarita”. Now I’m not really sure why that thought popped into my head, but I can say that it was an inspirational choice, and went down so well that I had to order a second one! Great warm up for 800 free right….Not!

I really love Manchester Aquatics Centre see here here and here for a selection of my recent adventures in this metropolis, and whilst I’m on that subject I’m sure that regular readers will be delighted to learn that the overwhelming odour which was apparent on my last stay here appears to have dissipated.

As for my actual swim…. well despite the inspiring surroundings I can’t really describe it as anything other than pants ( I have used a rather more colourful adjective in conversation but am trying to maintain a mature civilised and dignified tone to this blog.) I was a whole minute slower than Montreal last year…….aargh disaster, not to mention the fact that I had to grapple with that suit again (only there’s 10lbs more of me than there was the last time I raced) and managed to stick my finger through it!

Not really sure that today’s performance was helped by indulging in Mexican inspired cocktails but I did have a great night out. The highlight of today was  the organisers of next years European Championships finally publicised the dates of the event 25th – 29th May 2016, so put that in your diary and start training now. You will of course realise that this is a case of “do as I say not do as I do!”