I don’t suppose anyone noticed that I’ve been missing from here for a month or 4 but I thought I’d try and resurrect the habit, in light of the looming binge splurge for the Europeans and in a vain effort to do myself justice. I also thought I’d share my comic columns over the last 4 months. Just so you are thoroughly up to date with Binge’s current state of (un) fitness.

Such is the chaos of Binge’s life, that as I flew into Heathrow from Kazan my family flew out of Newcastle to Lanzarote for our annual summer holiday (without me) We had this elaborate arrangement whereby Bob and Teenage Triathlete would drive to the airport and leave the car in the short stay car park and I would then collect the car and drive home.

I avoided the obvious banana skin by remembering to take the spare key with me and arrived at Heathrow to a multitude of Facebook posts reporting on being “at Newcastle Airport” and not being able to “wait for our flight ” but no texts with the location of the car.

My anxiety rating climbed from mild to frantic, as my texts and replies to various inane status reports to both of them went unanswered, but finally as I was about to board my flight to Newcastle my phone pinged with a picture message and a photograph of the car. Sorted! only four days back at work before I could catch the next flight out to join them. 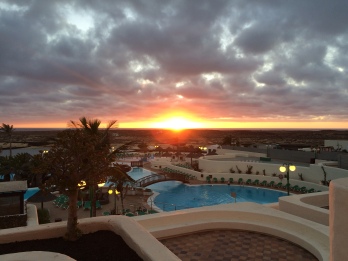 For my sport mad family Club La Santa is a predictable and very safe choice for a family holiday and I was looking forward to chilling out and trying to put in some yardage. I decided from the outset that I would swim twice a day and go down to the pool with a pre prepared schedule. This worked pretty well and I was soon into a very comfortable routine.

The irony of doing a post championships training camp was not lost on me and thank you to the “friends” who gleefully pointed out that I should have completed my training before the World Championships. I might try that approach next year.

I wasn’t completely obsessive about pool time and interspersed my swimming schedule with forays into Stretching and Yoga classes. The latter provided much amusement to Teenage Triathlete, as one of the more obvious effects of ageing is that you become less bendy and I’ve discovered an inability to sit on my heels. I persevered with this rather public humiliation, as in actual fact these classes often provided me with a welcome excuse to cut the morning swim session short.

The old pool at Club La Santa remains my preferred venue to train in, and over the peak holiday season it is often empty. I always had a lane to myself and most mornings there were periods when I had the whole pool to myself. The solitude of swimming on your own is quite invigorating and I found myself living up to the mantra “smile breathe and go slowly” as I ploughed up and down the pool definitely going slowly but occasionally having the smile replaced by a grimace as the sets started to ramp up.

I am however a sociable creature and after a week of being Billy no mates I began to tire of the Zen thing and craved a bit of company. I had noticed in the daily schedules “Adult Swim Squad” from 5pm – 7pm each evening so in a quest for companionship I duly signed up not quite knowing what I had let myself in for.

Turns out that Adult Swim Squad is a pretty simple concept. Three lanes are reserved in one of the new pools and a coach provides a 1k, 2k or 3k work out on a white board. You choose how far you want to swim and then get in and do the session. I opted for the 3k and was joined by a young (late 20’s) fit looking guy whose hat identified him as Chad Le Close.

I guess it wasn’t entirely unlikely that I would bump into the Olympic champion in this environment as I was swimming a few lanes up from Ruta Meilutyte, who was breathtakingly fast and there with John Rudd and his squad (apologies for the name dropping but I was seriously impressed).

By the end of the holiday I had covered a quite impressive (by Binge standards) 90,000 metres. I returned home full of enthusiasm and determined to make every masters session possible. This determination lasted about as long as my sun tan and as I tap out this column my last swim was the North East Regional Championships two weeks ago which will be remembered for yet another disaster in the 200 medley.

You might think it impossible to top last year’s impressive DQ for turning on the backstroke leg 3 metres from the wall and sculling backwards, but this year I was too busy chatting in the café to notice the end of the warm up, and squeezing myself into one of those racing suits in time to make my heat just wasn’t going to happen, so I completely missed the event. Bother! I need to swim a long medley at the Nationals for decathlon purposes…. probably should do some training.

2 thoughts on “Playing catch up Kazan to Lanzarote”