I’m trying to fill you in on the last three months of the Binge Swimmer’s life as I am acutely aware there’s been a Binge Blog Vacuum. Being a lazy cow the easiest way is to just use  my old copy from the Swimming Times column, hence the odd reference to my (long suffering) editor and “last month” and column.  Is this a case of “life imitating art?” Anyway here’s the 1st instalment in Binge’s catch up . 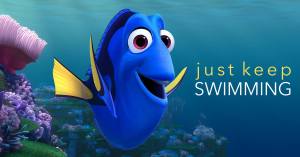 Just when everything was going so…swimmingly. The Binge comeback faltered during April when a rather painful back injury slowed me down.

One day at the end of March I sat down in a chair perfectly fine and when I stood up something just felt wrong and I had to virtually push myself off my desk to straighten up ouch. 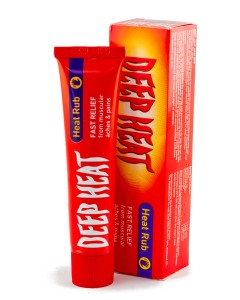 I couldn’t actually identify what had caused my lower back to spasm but the effect was that the top half of my body was slightly offset from the bottom, a very strange experience.

I did find that trying to keep moving helped, as any attempt to mobilise myself after sitting or lying down, was an awkward painful struggle and took a minute or so for me to be able to stand upright.

I’m also not sure that driving to Manchester and back in one day was a particularly sensible thing to do and probably exacerbated the problem but needs must.

So there it was, a ready made and genuine excuse for the Binge swimmer to stop swimming. Yet despite having to miss a number of sessions I managed to keep my monthly yardage on target (albeit just) covering almost 40,000 metres. I have discovered that one of the virtues of having overachieved in the first 3 months of the year was that my monthly target has fallen from 50,000 metres a month to 40,000 metres a month.

Lots of warm showers, gentle swimming, deep heat and maintaining the gym sessions seemed to help, although the latter was dramatically scaled back and included a lot of stretching exercises for my lower back. The effect of all of this was I became a very grumpy person but gradually over the month the problem subsided. 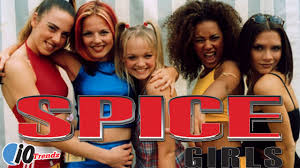 Thinking I might just about be on the mend I ventured down to our local public masters session, where there was a bit of a Spice Girl reunion going on as my lane mates Shazza and Claire turned up.

We haven’t swum together for the last month because on the odd occasion I turned up at these sessions, it coincided with the sessions they missed. Oh yes and there was also one rather spectacular cancellation of the session caused by a kid vomiting in the pool!

Now I know that the Public Masters Session at the Louisa Centre in Stanley is a far cry from the Closing Ceremony of the 2012 Olympics (which you will remember was the rather low key occasion for the original Spice Girls reunion) but with a bunch of “Wannabe” swimmers the banter in our lane was as good as ever as we tried to “spice up our life”.

Sadly Evil Mutant Swim Coach spoiled our party with a session which was clearly “too much” and with tough repeat times causing the swims to merge and a “2 repeats become 1” continuous swim. The girls graciously insisted that they would “let me lead the way.” In a rare moment of compassion (in my experience a rare trait in a swim coach) the rest increased and the distances shortened in rounds 2 and 3 of the set. Sadly my body wasn’t playing ball and the derisory improvement in pace wasn’t worth the effort I was putting in! Although the additional rest did allow for more chat (even if it was just an expletive or two) 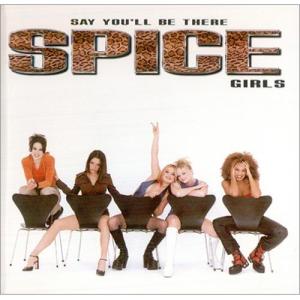 Sporty and Posh (could we have a Bingespice or shall I just settle for Scary) were effusively grateful at the end for being able to draft off me.

Posh who as an ex runner has an awesome aerobic capacity and sat on my feet for the whole session, was particularly pleased that she did not have to read the clock and enthusiastically encouraged me to turn up next Tuesday “go on Binge say you’ll be there” to which I gave my usual non committal response.

I left feeling a little disappointed with my performance but heartened at my usefulness.

Any one who reads this column regularly may have noticed I have consciously tried this year to have more competitive outings, to maintain this I’ve rather impetuously entered the British Masters Championships in Aberdeen!

Now how on earth do I get up there! (and compared to the majority of other English Swimmers I have a bit of a geographical head start.) I think this is all part of Swim Scotland’s cunning secret master plan for world domination by holding it in the world’s most inaccessible and unheard of venue, chosen specifically to deter the Sassenach hordes from attending, “if you can’t beat em block them!” 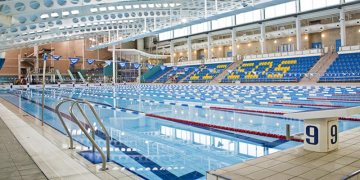 As a warm up event I thought I’d make a debut at the Yorkshire Masters but as this goes to press, the North East Regional Championships which are being held at the John Charles Pool the preceding weekend have been moved to Sunderland because of a problem with the pool, no word from the organisers yet as to whether or not the Masters event will be affected.

You see what I did there,? I’ve finished with that writer’s device the cliffhanger, leaving you to eagerly anticipate next month’s column which will provide the answer to the questions did Binge manage to swim in the Yorkshire Masters? and, can she find a way to navigate from North West Durham to Aberdeen?

NB this column previously appeared in print in the Swimming Times